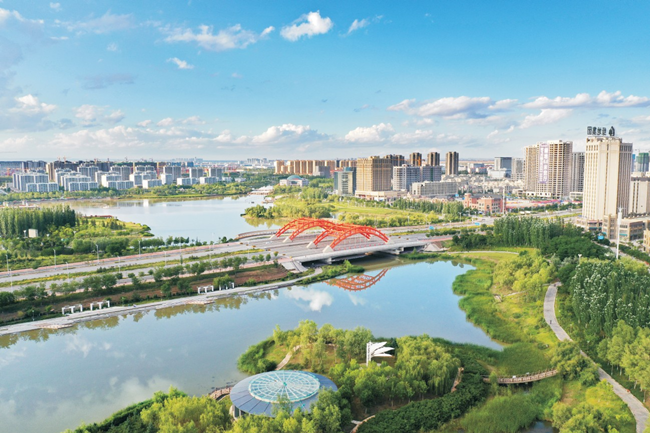 Lanzhou New Area, the fifth State-level New Area, is located in the Qinwangchuan basin northern to the Lanzhou city of Gansu province. [Photo provided to chinadaily.com.cn]

The Lanzhou New Area (LNA) is located in the Qinwangchuan basin northern to the Lanzhou city of Gansu province with the planning range containing 6 towns of two counties—Yongdeng county, Gaolan county. It has a total area of 1,744 square kilometers, a planned construction area of 246 square kilometers with resident population of 360,000 at the end of 2019.

In the past, Qinwangchuan Basin was dry with little rainfall and sparsely populated. In the early days of Reform and Opening-up, Song Ping, the former member of Standing Committee of Political Bureau of the CPC Central Committee and secretary of Gansu Provincial Committee of the CPC, put forward the idea of "Yin Da Ru Qin" which was the largest water diversion project in Asia, and he also proposed the great idea of developing industry and building Lanzhou Satellite City in the Qinwangchuan Basin, which laid a solid foundation for building a modern new city in Qinwangchuan Basin.

In August 2010, Gansu Provincial Party Committee and Provincial Government set about establishing LNA; In February 2011, Lanzhou New Area Working Committee of the CPC and Lanzhou New Area Management Committee were officially established; In August 2012, the State Council officially approved to establish LNA, and endowed it with the strategic positioning of "important economic growth pole in the northwestern region of China, important industrial base of the country, crucial strategic platform of opening to the west and model area of undertaking industrial transfer".

Adhering to the planning guidance, various plans have been formulated with high standards, which has achieved full coverage of detailed plans and overall urban and rural planning, and formed a planning system that guided the scientific development of LNA.

Integration Development Plan. According to the idea of complementary development between LNA, Lanzhou, Baiyin and other surrounding cities, LNA plans to carry out the ecosystem protection of the mountain, river, forest, farmland, lake and grassland, aiming at creating the "Hetao Plain in the middle of Gansu" and building the third pole of the Lanxi City Cluster and the main development area for Lanzhou.

Lanbai Urban Area Development Plan. LNA focuses on expanding the development space of "Big Lanzhou", strengthening ecological management in the middle and upper reaches of the Yellow River and improving economic and population carrying capacity. LNA attaches great importance to the development of Lanxi City Cluster, conducting directional planning research on 11,100 square kilometers of 10 counties (districts), 124 towns (streets) in the Lanbai Urban Area. After more than one year of investigation and demonstration, LNA is preparing to harness the unused land of 5,000 square kilometers of low hills and gentle slopes in the Lanbai Urban Area. After harnessing, 2.1 million tons soil erosion, 0.25 million tons silt flowing to the Yellow River and 0.85 million tons dust can be reduced annually. The value of ecosystem services will be increased by more than 30% and its carrying capacity for 10 million people and 100 billion GDP will be provided. LNA also undertakes the task of provincial talent and immigration settlement and accelerates the pace of agricultural modernization and new urbanization, which lays a solid foundation for the high-quality development of LNA, Lanbai Urban Area, and even the Gansu province.

Located in the center of three capital cities that is Lanzhou, Xi'ning and Yinchuan, LNA can benefit the five northwestern provinces of China internally, and the countries along the Silk Road in Central and Western Asia, South Asia and Europe externally. It is the important node area along the Belt and Road, enjoying superior geological location.

Comprehensive transportation system. In terms of internal traffic, it has built a "20 horizontal and 18 vertical" traffic network layout with a total mileage of 701 kilometers. In terms of external transportation, it has the only large international airport in Gasnu—Zhongchuan International Airport, which can reach major cities at home and abroad. After the third-phase expansion, there will be more than 300 domestic and foreign air lines. Ten railway lines, including Lanxin, Baolan, Lanzhang 3&4 Line, and Zhonglan Passenger Train, pass through here. It is the important hubs of the national "8 vertical and 8 horizontal" railway network. In the future, there will be 19 railway lines in 10 directions intersect here, forming a "Double Ring" regional railway system with the main urban area of Lanzhou. There are 7 external highways connecting the surrounding cities, and 3 fast thoroughfares planned to be built connecting Lanzhou, forming a "1 ring and 6 shots" highway network and a "3 horizontal and 1 vertical" ordinary highway network.