The Mogao Grottoes, one of the country’s three major Buddhist art treasures, are located at Dunhuang, near the west end of the Gansu (Hexi) Corridor. They were first built in the Emperor Fu Jian period of Former Qin (357-385) and were continuously renovated in many dynasties including the Tang Dynasty (618-907) and Yuan Dynasty (1271-1368).

The Mogao Grottoes have 735 caves and murals covering an area of 45,000 square meters and 2415 clay colored sculptures. They are home to the largest and richest examples of Buddhist art in the world.

In 1961, the Mogao Grottoes were announced by the State Council of the People's Republic of China as one of the first key cultural relics under national protection sites. In 1987,  they were listed as a world cultural heritage.

The Mogao Grottoes in Dunhuang City, Longmen Grottoes in Luoyang City, Central China's Henan province, and Yungang Grottoes in Datong City, North China's Shanxi province are the three major grottoes in China. The Maiji Mountain Grottoes in Northwest China's Gansu province were lately added to the list as the fourth.

The Mogao Grottoes have a time-sharing visitor mode that uses real-name reservations. Tourist reception capacity is 6000 tickets a day. During the peak tourist season in 2021, Dunhuang Academy will consider cultural relic protection and the number of interested tourists to launch a timely emergency plan. The quantity of tickets for the emergency visit mode will be 12,000 tickets a day.

The Digital Display Center is the first stop when visiting the Mogao Grottoes. Visitors should arrive at the center 30 minutes in advance to get a ticket with personal ID card.

Off season: December 1 to March 31(next year) 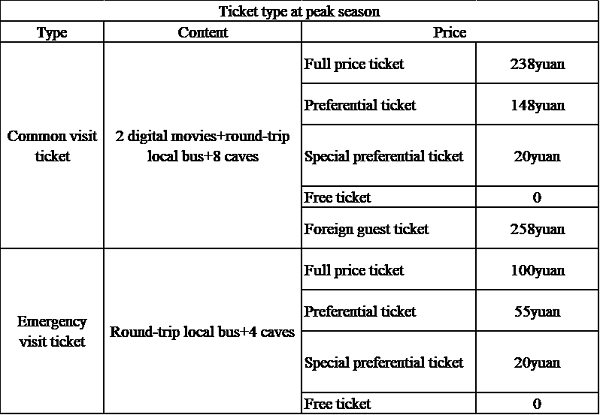 Notice: The time of sale of emergency visit tickets will depend on the situation of normal ticket sales. Please follow the website of online booking to learn the details.

Preferential tickets are sold to

(2) Domestic full-time graduate students with a master degree or below;

(3) Chinese citizens aged over 60 to under 70 (Including Hong Kong, Macao and Taiwan)

Special preferential are ticket sold to

(2) Chinese citizens aged 70 and above (Including Hong Kong, Macao and Taiwan)

Free tickets are given to