As the capital city of Northwest China’s Gansu Province and an important city on the Silk Road Economic Belt, Lanzhou has a great potential for attracting investment.

Affected by the downward pressure on international and domestic economies, the economic development in Lanzhou during the 13th Five-Year Plan period (2016-2020) has turned from high-speed growth to steady growth.

Since the start of the 13th Five-Year Plan (2016-2020), Lanzhou has continuously adjusted its structure of investment, enabling it to play a major role in supporting economic growth and guiding the economy to gradually shift to a new stage of development that improves quality and increases benefit. 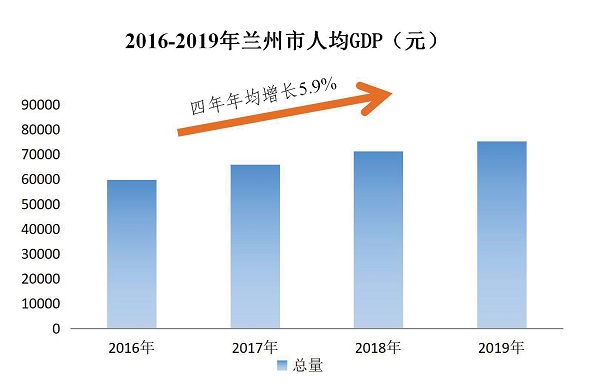 Lanzhou’s financial industry, as the core of the modern economy, has never stopped reforming and innovating. Its ability to serve the real economy has been improving  and the capital market has been active.

Lanzhou’s financial institutions’ balance of deposits in local and foreign  currencies increased by 1.1 times year-on-year to 908.4 billion yuan (US $140.5 billion) with an average annual growth rate of 2.7% over the five years.

Lanzhou’s financial institutions’ balance of loans in local and foreign currencies increased by 1.8 times year-on-year to 1,316.7 billion yuan (US $203.7 billion) with an average annual growth rate of 12.7% over the five years.

Expenditures for people’s livelihoods have increased. The total allocations for education, culture, sports and media, social security and employment, health, agriculture, forestry and water are now 106.7 billion yuan (US $16.5 billion).

National strategies such as the Belt and Road Initiative, the go-west campaign, the ecological protection and high-quality development of the Yellow River basin, and the construction of urban agglomeration have given Lanzhou a number of major supportive policies.

Lanzhou’s late-comer advantages in opening-up and development are becoming increasingly prominent, and the overlapping opportunities it faces are unprecedented.