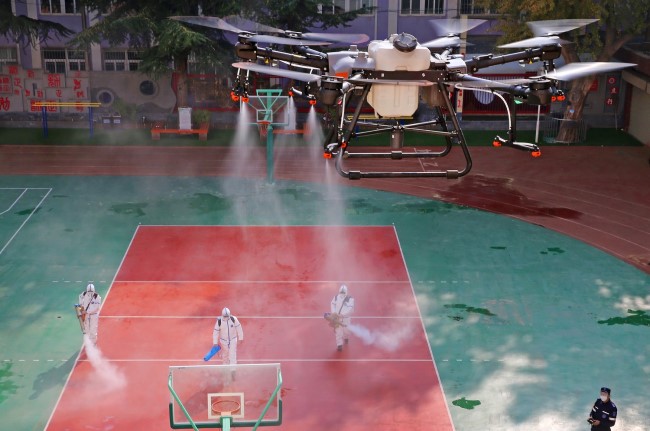 Volunteers disinfect a middle school with the help of a drone in Lanzhou, Gansu province, on Wednesday. TIAN XI/FOR CHINA DAILY

The number of severe COVID-19 patients in Gansu province, one of the hardest hit areas during the latest outbreak in China, grew to 13-nearly one-fifth of the province's total-on Thursday, which deserves attention, an expert said.

Medical experts from across the nation are now working with local doctors to create treatment plans for each patient.

Zhang Zhongde, deputy head of the Traditional Chinese Medicine Hospital of Guangdong Province and one of the medical experts working in Gansu during the outbreak, said most of the confirmed cases in the province are older than 50, and nine of the severe patients are above age 70.

"Not many patients have a fever this time in Gansu. Rather than fever, most of them have symptoms of dry throat and cough," he said. "Most of the patients have other underlying medical conditions such as diabetes, high blood pressure and coronary heart disease.

"Combined with the high-speed spread of the virus and a long incubation period, medical treatment is more difficult this time," he said during an interview with ThePaper.cn. 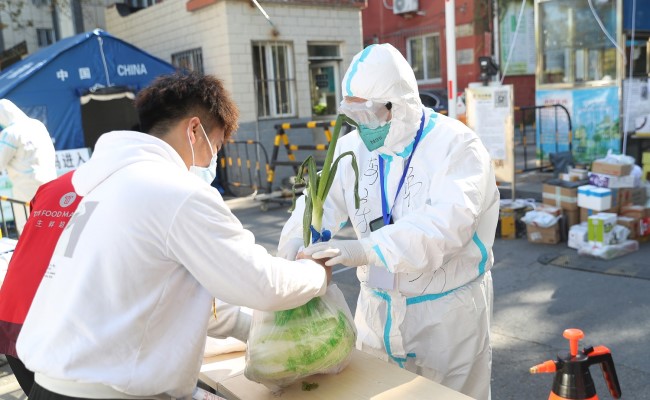 A community worker receives vegetables before distributing them to residents quarantined at home in Beijing's Haidian district on Wednesday. ZOU HONG/CHINA DAILY

The medical team has chosen to combine TCM and Western medical treatment to stop the progression of the patients' conditions from severe to critical, Zhang said.

Gansu is not the only place facing such challenges.

Between Oct 17 and 25, China reported 168 locally transmitted cases, among whom 20 were in severe condition, according to a report by the Health Times, which compiled the data from the National Health Commission.

There has been an obvious rise in the number of severe cases reported in China nationwide since Oct 21, according to the Health Times.

During a news conference on Tuesday, the Beijing municipal government said that the city had one severe patient out of all cases who were receiving medical treatment at Beijing Ditan Hospital.

As of Thursday, more than 20 cases were reported in the capital.

Chen Xiaoyou, deputy head of the hospital, said at the conference that most of the locally transmitted cases during the current outbreak are seniors-one aged 57 and the others between 61 and 69.

He added that most of the senior patients have underlying medical conditions, including diabetes and high blood pressure.

He said it's possible those patients' symptoms would get serious as time goes on, and the hospital has prepared for the possibility of more severe patients with increased allocations for both medical staff and equipment.