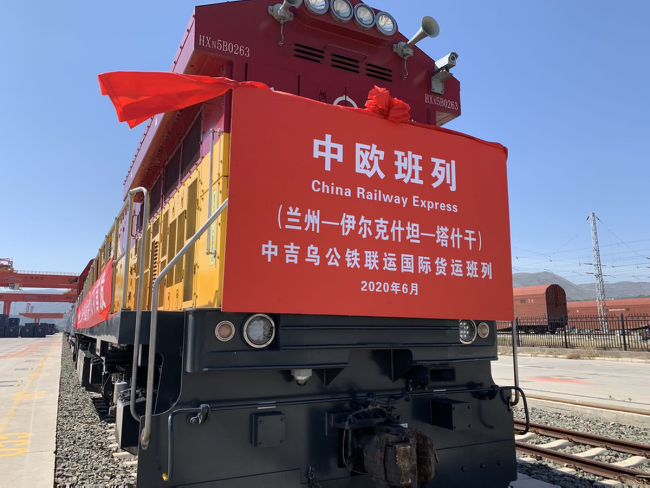 An overseas warehouse jointly developed by companies in Uzbekistan and China was opened on Dec 27 in Lanzhou, capital of Gansu province, in a bid to facilitate cross-border trade between the two countries.

The same day, a train carrying fabrics, motorcycles and other cargo worth $3.38 million departed from Lanzhou Dongchuan Station for Uzbekistan through the Khorgas land port in the Xinjiang Uygur autonomous region.

Meanwhile, another train carrying 20 containers began the return trip via the China-Kyrgyzstan-Uzbekistan express line. It is expected to arrive at the Lanzhou warehouse early this month.

In October, the management committee of the International Land Port of Gansu (Lanzhou) signed the Strategic Cooperation Agreement on Trade Logistics with Su Shi Kun in Uzbekistan and JST Logistics in Lanzhou to establish a warehouse in the Gansu capital.

Located at the bonded logistics center of the port, the warehouse has 9,000 cubic meters of storage.

"With overseas warehouses, delivery times are reduced to only three or four days from almost 30 days in the past," said Su Liang, vice-general manager of Lanzhou International Land Port Investment and Development, operator of the new warehouse.

Overseas warehouses are set up by export or cross-border e-commerce companies in the country or regions their customers are located and large quantities of goods can be exported for storage at these special warehouses, greatly reducing transportation costs, Su said.

"When customers place orders, cross-border e-commerce companies or exporters can deliver goods to them directly from the warehouses," he added.

Also in October, an overseas warehouse for Gansu was set up in Tashkent, the Uzbek capital. It covers an area of 60,000 square meters.

"Exported goods can be transported to Turkmenistan, Afghanistan and other countries by vehicle, while imported goods can be brought back to China on the China-Kyrgyzstan-Uzbekistan freight train," said Jiang Yuhan, executive director of JST Logistics.

In recent years, JST has been actively exploring the market in countries and regions involved in the Belt and Road Initiative.

"We have opened a more convenient and efficient green channel to promote the export of Gansu's agricultural and sideline products, machinery and equipment, as well as the import of cotton yarn, mung beans and other goods from Uzbekistan," Jiang said.

Xinhua contributed to this story.